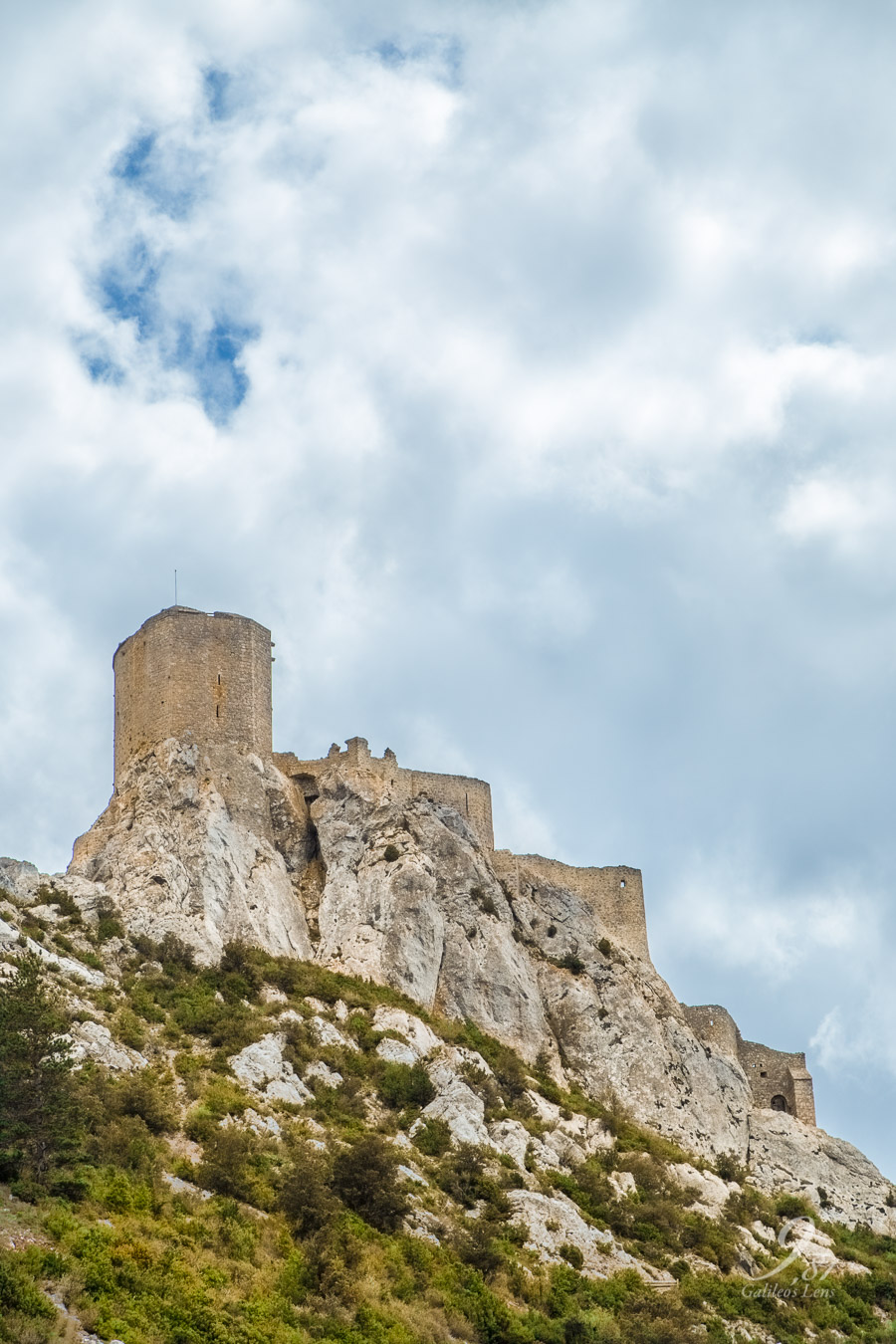 During our trip to Carcassonne, Jeroen and I made a legendary castle road trip. We saw three of the most beautiful Cathar castles in one day. We booked a crappy old car at a car rental company, but we ended up driving a nearly new Jeep… without an additional cost. This happens every single time we rent a car. It must be good karma! We also got a built-in GPS, so getting lost would be impossible. This enabled us to see 3 castles in one day. A wicked trip! Today I will show you the beautiful castle of Quéribus!

Quéribus: beauty of the Corbières region

The Corbières is not only the region where they have extremely good wine, but the region is also known for its beautiful Cathar castles. Quéribus is one great example. When you approach the castle from the plain of Roussillon, the mountains seem too steep to climb. The high and isolated location of the castle was deliberately chosen to simplify the defense of the castle. Fortunately, you can drive part of the mountain road by car, but the last part can only be done on foot.

All the way up there, the wind blows through the castle like a madman. This makes climbing and exploring the castle even more exciting. The view up there ?! Breathtaking! No need to go all the way to Canada to get such a beautiful view … I could keep watching over the beautiful plains, the mountain range and the Pyrenees in the distance. Jeroen was also very impressed … and he is not easily impressed.

The last stronghold of the Cathars

The castle also has an important historical value. During the Albigensian Crusade in the 13th century, this was the last castle where cathars were hiding. In 1255, unfortunately, this castle fell into the hands of the Crusaders. The cathars were given the choice to convert or to get burned at the stake. Most cathars opted for the latter and died a martyr’s death.

The fall of Quéribus also was the fall of the Cathars and the victory of the Catholic Church. It was impressive to stand on such an important piece of (dark) history. Until the 17th century Quéribus was the frontier of the Kingdom of Aragon. Judging from the view now, it must have been a magnificent kingdom.

The castle of Quéribus has been relatively well preserved. We discovered several rooms, floors, small hallways and even a hidden cellar. It was lovely to explore such an ancient castle undisturbed, only accompanied by the ever howling wind.

For those who are planning a visit to the South of France: do visit the castle of Quéribus! For those who have no such plans: immediately start making them! 😉

How I left my heart in Canada

As a matter of fact, my love for France doesn’t get the attention it deserves on this blog. Even though I...

Hiking along the St. Olav Ways in Norway

During our Visit in Trondheim, I became intrigued by some signs with special cross markings on it and the words...