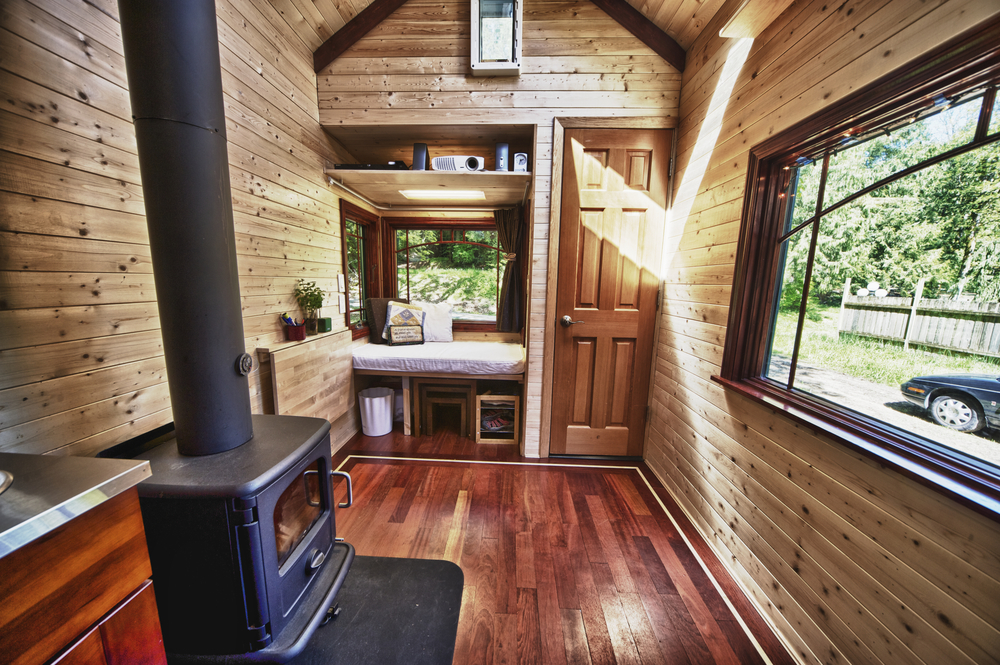 About a year ago I was a complete stranger to the phenomenon of the ‘Tiny House Movement’. You could say I was more than bewildered when I found the blog of an American couple that used to live the life of gadgets and luxury, but then decided to completely change course when unemployment struck and costs rose. In just six months they built their very own ‘tiny house’ on wheels of no more than 13m2.

I’m also very curious to hear if you’re as enthusiastic as me and if you’d think such a tiny house would be something you would actually do. Let me know in the comments!

What is the ‘Tiny House Movement’?

There isn’t really a clear definition of what a tiny house should be, but you can distinguish the following features:

Isn’t it absurd to work hard your whole life long just to pay your mortgage or rent, while you could live much simpler and more carefree? To be close to nature has been a wish of mine since I was young, and if choosing for the Tiny House Movement would mean I can travel more often, you wouldn’t hear me complain neither. On top of that, living smaller would also mean a smaller impact on our environment. Also something I hold dear.

Because the Tiny House Movement is still a relatively young movement, it’s hard to know what legal framework to work with. Space to put your tiny house is often a problem (especially in Belgium/Europe where I’m from), and becomes even more complicated if you don’t intend to reside there permanently. Another discussion arises concerning the legal status of these tiny houses, from property taxes to domicile.

Even with those uncertainties the Tiny House Movement offers countless possibilities and should not be cast aside idly. That’s why I’ll continue to watch the evolution of the movement from up close.

Creativity is a must!

It’s heavenly to browse the web for creative examples of tiny houses. Just to see how other people figured out to live in a tiny space with maximum comfort. Here are some of my favourite tiny houses.

Is a tiny house for me?

Let’s be honest, the legal and practical issues with tiny houses are real. But aren’t unsurmountable either! That being said, there are other arguments that hold me back. My partner and I are terrible handymen, it would take a village of carpenters, plumbers and electricians to help us build and maintain a tiny house. Another problem is that my partner is 6 feet 23 and would bump his head continuously in such a small place. Let alone fit in the bed or shower. 🙂

I’m not sure either we wouldn’t get frustrated in such a tiny space over time. But it would force us to give up material living and think about what we really need in our lives. So that aspect of the Tiny House Movement is a two-edged knife. It would require a significant change in our daily life to live tiny!

So, the jury is still out if living in a tiny house would be something for us. But the idea is too good and worthwhile to stop thinking about it. What would you do? Live tiny?

The ecological footprint of your travels

How to deal with bears while travelling?

We are busy translating every post. More are added each day, so make sure to come back tomorrow!

Photo of the week: Berg Lake in Canada

This time, the photo of the week is from our hike through the Rockies. We did a 4-day hike in Mount Robson, part of...